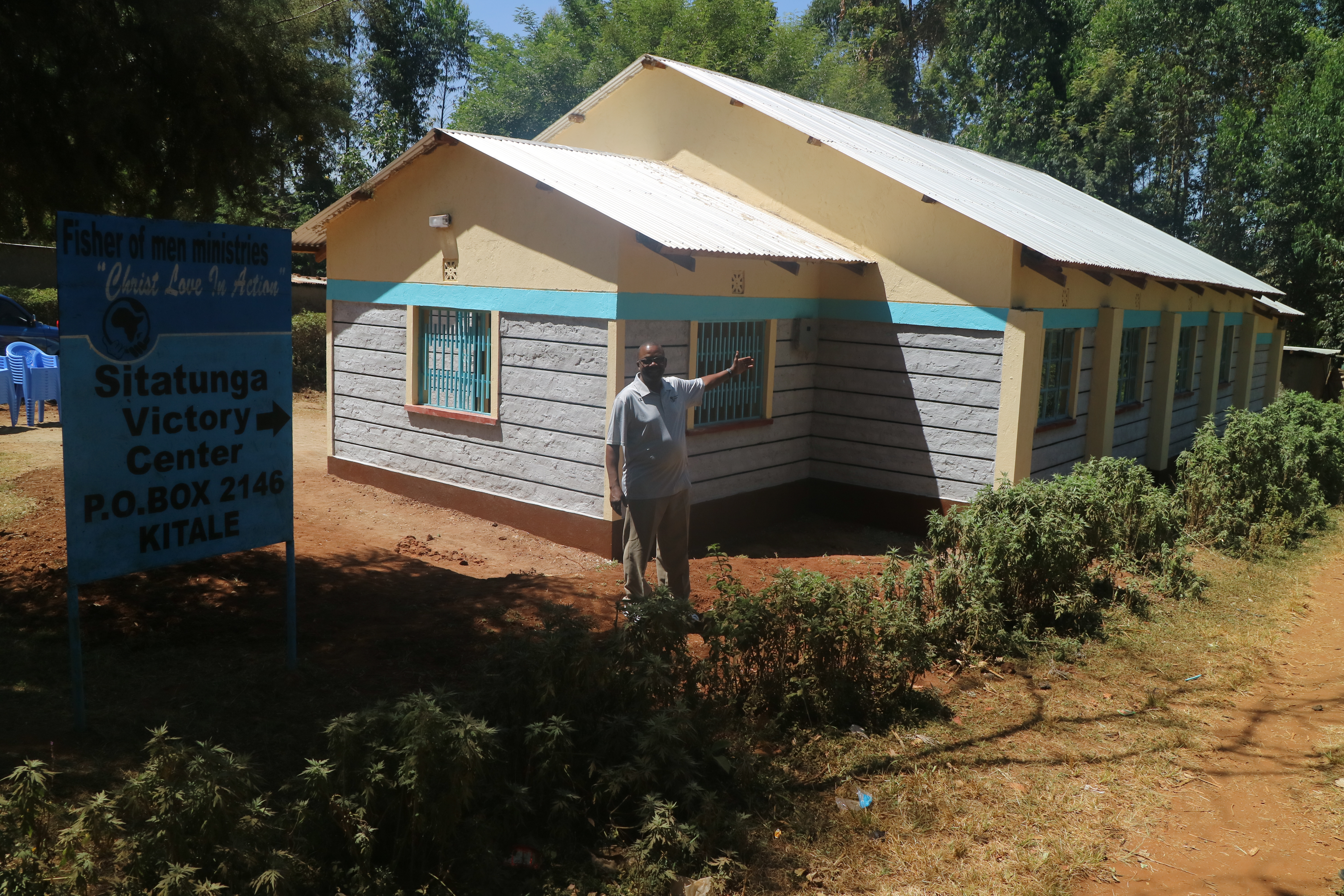 The Fishers of Men Church at Maili Saba is located in Western Kenya in TransNzoia country.  It is 70 kilometers from the Kenya/Uganda border and about 12 kilometers east of Kitale. (Kitale is 237 miles north-west of Nairobi, nearly a seven hour drive.)

In 2000, Pastor Joshua Ngao, Founder & President of Fishers of Men Ministries, along with his wife Kathleen met Pastor Kennedy Magwiru in Nairobi.  This meeting was very fruitful and they agreed to work together.  This collaboration created the first FOM Ministries church in Western Kenya.  Shortly after the initial meeting, Pastor Kennedy and his wife, JaneRose, began holding weekly worship services in a classroom of a local school near their home in Maili Saba.  What started with a single family, as word spread, the congregation gradually began to grow.  Thus creating Maili Saba Fishers of Men Church.

The Maili Saba church’s membership continued to grow and soon outgrew their worship space at the school.  In 2001, FOM Ministries U.S. headquarters along with assistance from friends of the ministry helped purchase a plot of land, erected a semi-permanent church building, and continued to provide support for the pastor and church.  In 2003, the congregation of Maili Saba FOM, through sacrificial giving from each family, started constructing a permanent church facility.  With generous financial assistance from the United Methodist Church in Savanna, Illinois, FOM Ministries was able to complete the church’s new roof.

Maili Saba FOM has since grown from a small village church to a larger church community that is impacting the neighborhood and Maili Saba Township.  They have become a haven of hope offering spiritual nourishment and care.  The love of Christ is active and growing through the church’s missional communities, which exhibit love to one another and promote a true sense of belonging to the family of Christ.

The Maili Saba church is still under the leadership of Senior Pastors Kennedy & JaneRose Magwiru.  Together they work with a board of nine deacons who oversee various part of the church’s ministry programing.  This local Fishers of Men Church is a leader in reaching out with Christ’s love to the neighborhood and local community.  The church elders are optimistic of reaching greater heights for Kingdom of God.  They have a vision of become a solid ‘Sending Center’, whereby they want to start ‘sending out’ missionaries to other parts of the country to spread the Word and love of God.

The Maili Saba church also serves as the national operational headquarters of all the work completed by Fishers of Men Ministries in Kenya.

The Fishers of Men church at Mokoiywet is located in Western Kenya in TransNzoia country.  It is near Kitale and about 11 kilometers south-west of Maili Saba.

In 2000, Pastor Joshua Ngao along with Pastor Kennedy Magwiru began organizing a small assembly of believers to meet weekly in a classroom at the Mokoiywet public school.  This miniscule group started with only a few members.  One year later, the number of believers attending worship had increased tremendously. During this time Pastor Joshua Ngao, Founder & President of Fishers of Men Ministries, was working diligently behind the scenes to help this small group flourish. The Ministry, along with supporters in the United States, were able to provide necessary funding; enabling the congregation to buy a half-acre parcel of land.  This dedicated group of church members began constructing a provisional worship center.

As the number of worshipers continued to grow, the same dedicated group of believers began praying for the resources to build permanent facilities.  The congregation started volunteering to make construction-grade bricks by hand utilizing wooden brick forms and the red clay-like soil found on their property.  These determined brothers and sisters in Christ made 10,000 building bricks and fired them to increase the materials strength and durability.  Next these committed members began the physical process of constructing their permanent church.  In 2013, through Pastor Joshua’s continued ministry work, the Lord provided funds to complete the permanent church building where today this congregation continues to worship and attract new members.

Since 2011, Mokoiywet FOM Church has been led by Pastor Daniel Ndolo.  Daniel was one of the original worship attendees who was counseled and gave his heart to the Lord.  He continued with discipleship training and later became a pastor. Together, Pastor Daniel and his wife Janiffer assisted by the church’s board of deacons oversee various part of the church’s ministry programing.  This congregation is growing and changing lives by providing spiritual nourishment.  They continue to reach out to the Mokoiywet area with the love of Christ through their missional communities.

The Kimondo village is situated in a remote area at the foot of Mount Elgon.  It is approximately 40 kilometers from the border of Kenya and Uganda and 32 kilometers north-west of Kitale.  Unfortunately this area has a high level of poverty, illiteracy, and HIV/AIDS, which has left many children orphaned.

During a mission trip in 2001, Pastor Joshua Ngao, Founder and President of Fishers of Men Ministries, had the opportunity to meet a small group of Kimondo villagers who had been gathering together to worship and praise God.  From this fateful meeting, FOM Ministries officially established both the Kimondo FOM Church and the FOM Kimondo Victory Academy, a primary school and orphanage.

This church and community has continued to be an integral part of this very rural area.  FOM Ministries has worked diligently to provide beneficial services and sound biblical teaching to nurture and grow this small community of believers.

The Kimondo Church is led by Pastor Dickson Wamalwa along with his wife Lilian and the appointed board of deacons.  This team works together to build a strong faith community and church.  More importantly, the church is also vital link to the children of FOM Kimondo Victory Academy.  The local church along with Pastor Wamalwa provide spiritual guidance for the children, as he serves as the school’s Chaplain.

The Fishers of Men church at Sitatunga is located in TransNzoi County in Western Kenya.  It is situated about 20 kilometers north-eastof Kitale town-center.

From its humble beginning in 2001, the Sitatunga Fishers of Men Church began worshiping in a small classroom being led by Pastor Patrick Mauso.  Although Pastor Mauso led this tiny church, other individuals always read the lesson from the Bible, as Patrick had never learned how to read.  God, as always, continued His good work.  Late one evening Pastor Mauso was awoken by God; told to get up and read his Bible.  Although unsure, but not wanting to argue with God, Patrick quickly got up and began reading.  He didn’t stop until he had finished the entire book.

Under Pastor Mauso’s leadership and God’s great plans this little church continued to grow.  In 2003, Rev. Joshua and Kathleen Ngao along with friends in the U.S. donated funds to purchase a plot of land and begin construction of a semi-permanent church.  The congregation of Sitatunga continued to grow in their faith and serve our Lord.  Members also continued to pray for help in building a permanent church structure as God continued His work.

In early 2014, church members stepped out in faith and started hand-making bricks from the iron-rich clay soil found on the church’s property.  The congregation members took turns digging up the soil and forming bricks, four at-a-time. By August, members had made 7,000 bricks and stored them inside their crumbling church to be protected from the elements.  With so many bricks, the congregation was only able to worship in half of the church.  By late-September, 10,000 bricks had been created and God began working in the hearts of Christians in the Iowa-Illinois Quad Cities.  Quickly, sufficient funds were donated to “fire” the bricks; increasing the hardness and making them suitable for construction purposes.

As the congregation continued to pray for funding and direction, our Lord continued to work through the hearts of others.  By late 2015, the new church’s foundation was started.  Through their worship and faithfulness the Lord provided the necessary funds to finish the foundation and walls.  With God’s grace and provision, Pastor Joshua was able to secure additional funding to finish the structural construction and dig a water well.  Thus allowing Sitatunga FOM Church to provide clean fresh water for the church members and surrounding area, while providing livingwater through the gospel of Jesus Christ.

This relatively young, growing church is located in Western Kenya.  The church is situated in the suburbs of Kitale, about seven kilometers from the town center.

Sinendet Fishers of Men Church began in late 2016, as one of the original missional communities of Maili Saba Fishers of Men Church. The small group of believers were on fire for the Lord.  They grew quickly as their worship community continued to attract more attendees and believers.  This missional community was authorized by FOM leadership to operate as a Fellowship under the Maili Saba FOM Church, and continued to grow.

In January 2018, this Fellowship was officially commissioned as a full-fledged Fishers of Men Church by, Founder and President of FOM Ministries, Pastor Joshua Ngao. This new church is led by Pastor Hudson Muliga and his wife Pharcia.  Together, the Muliga’s, and the church’s board of deacons, oversee and successfully lead the different church departments in a growing ministry.

Currently, the Sinendet church is utilizing rented ground where a temporary structure was erected for their worship services. These faithful believers continue praying and trusting God to help lead the way to a new location they can establish their permanent church structure.  This congregation continues its rapid growth and is really making a huge impact to the neighborhood. 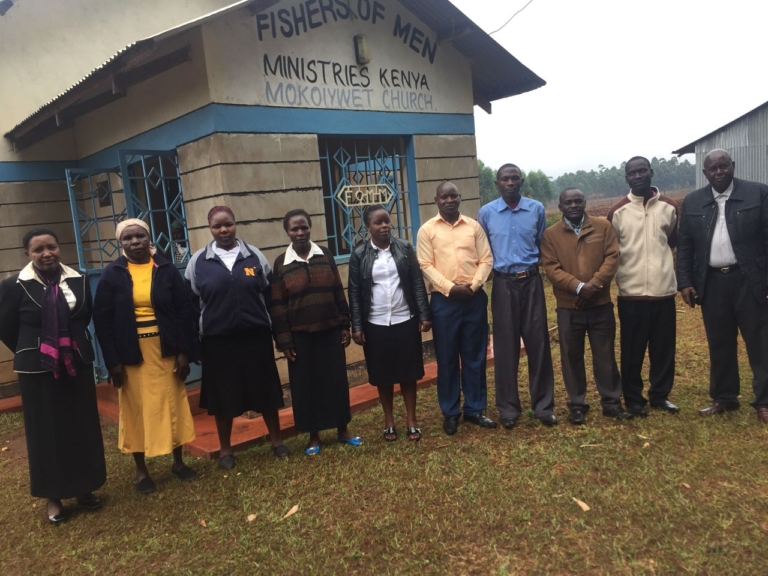 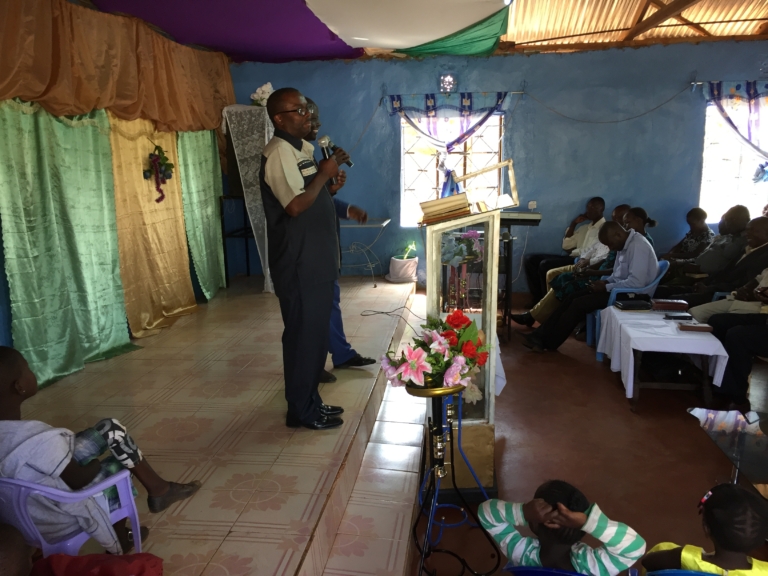 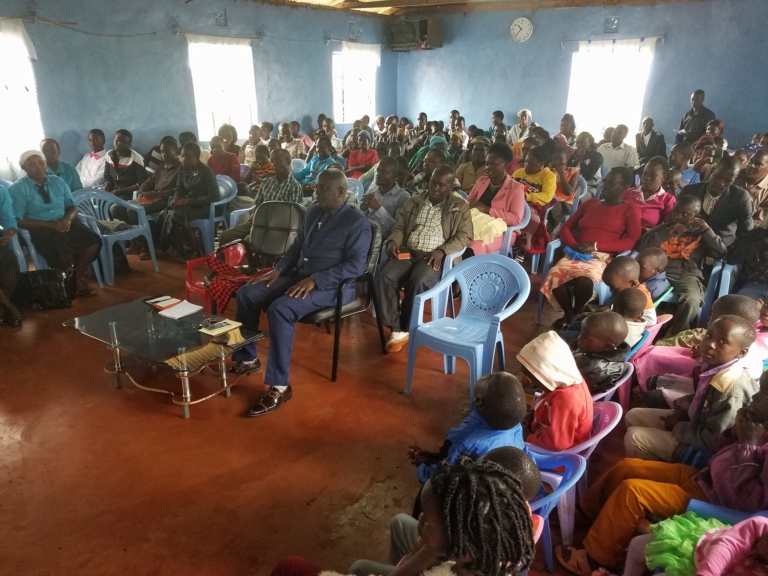 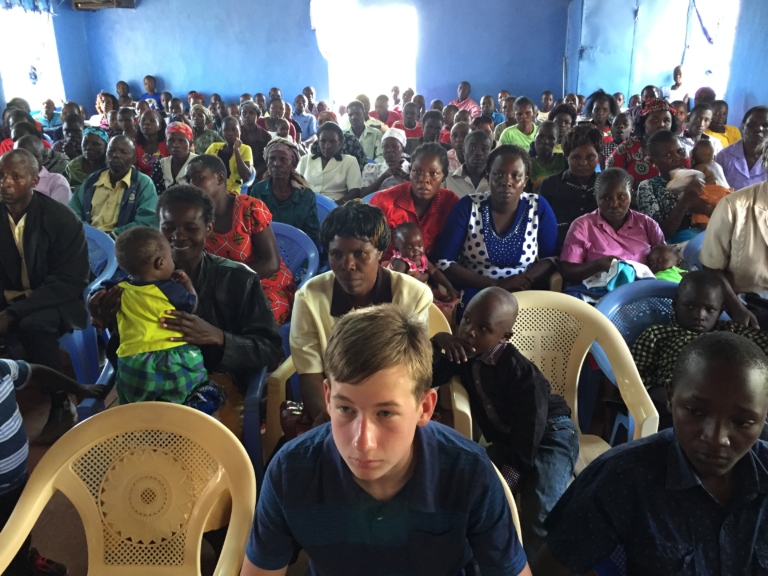 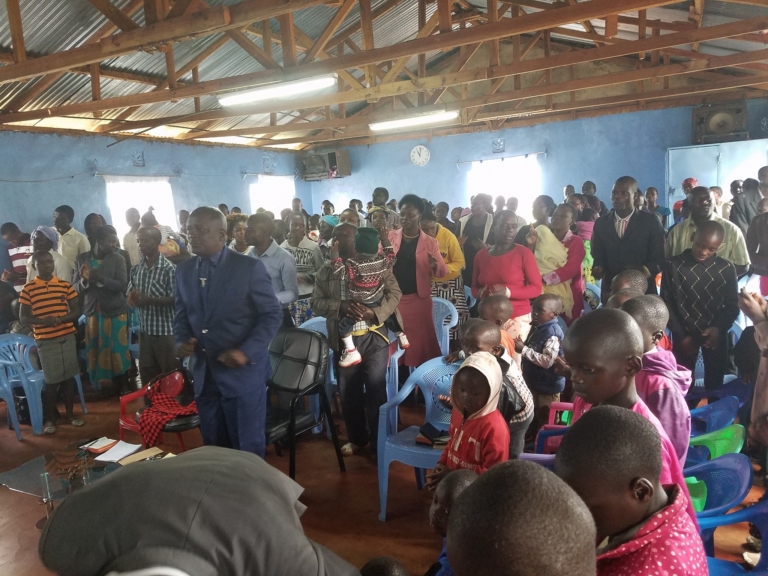 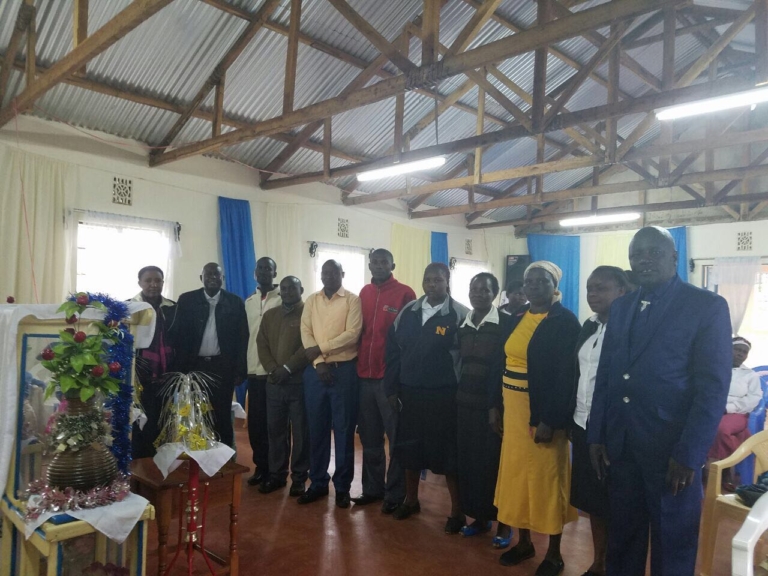 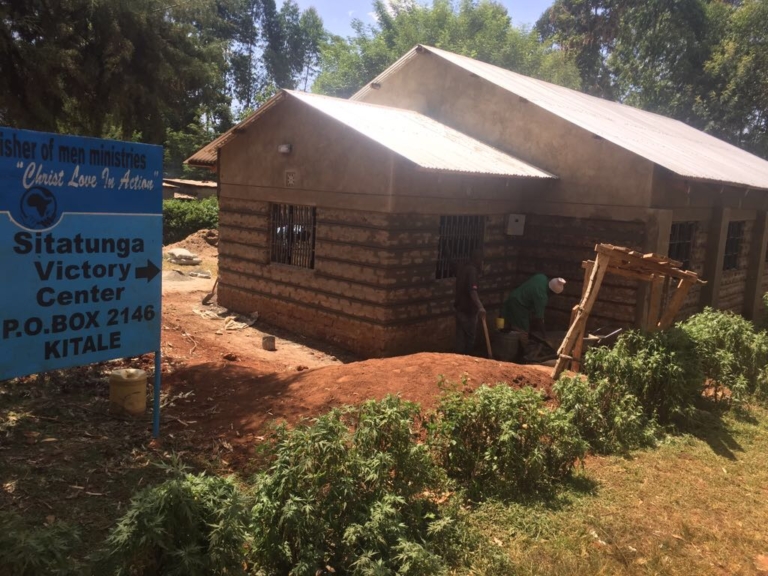 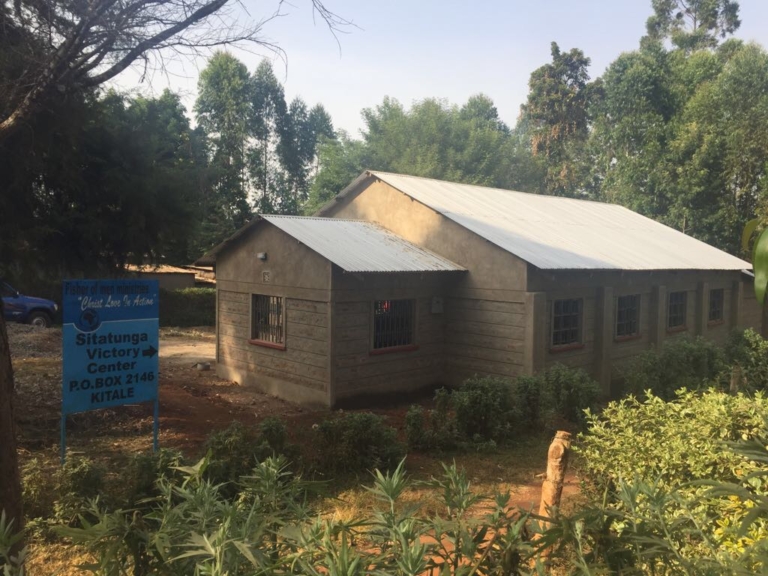 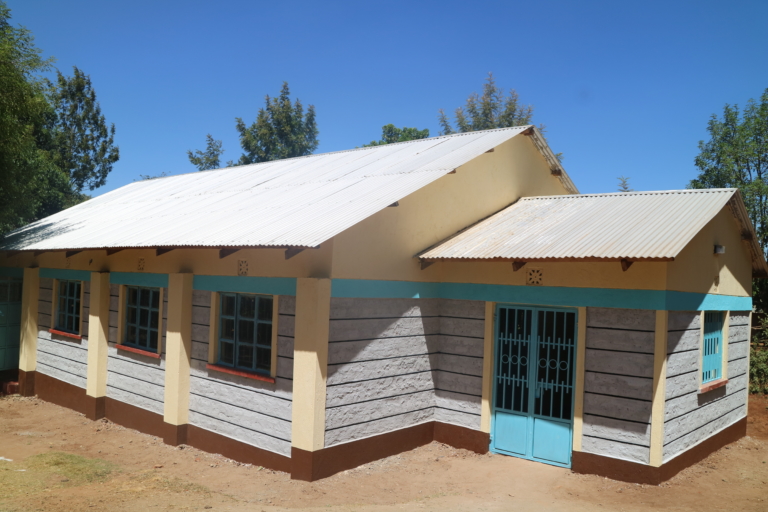 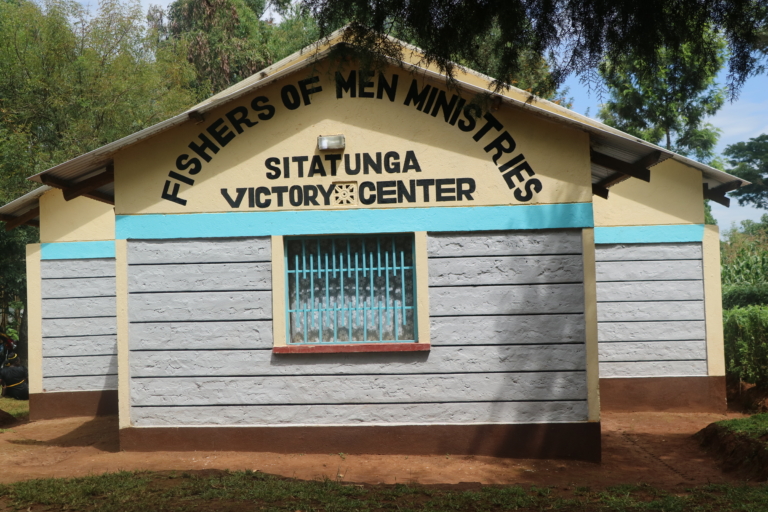 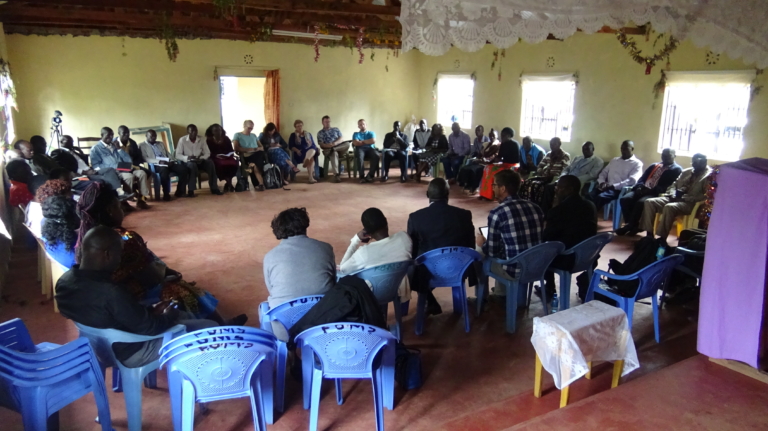 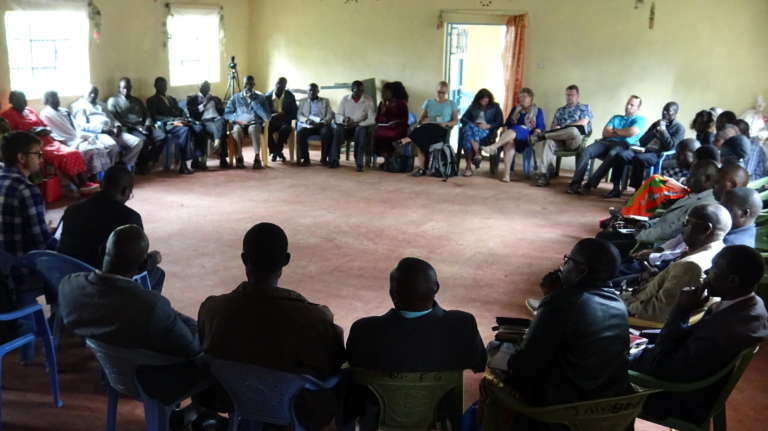 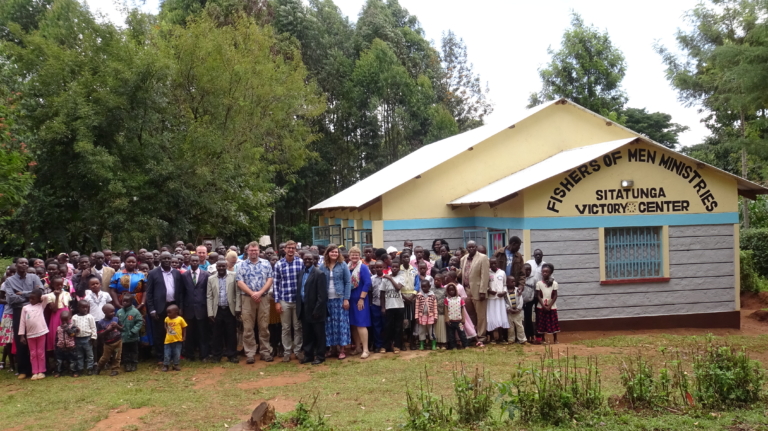 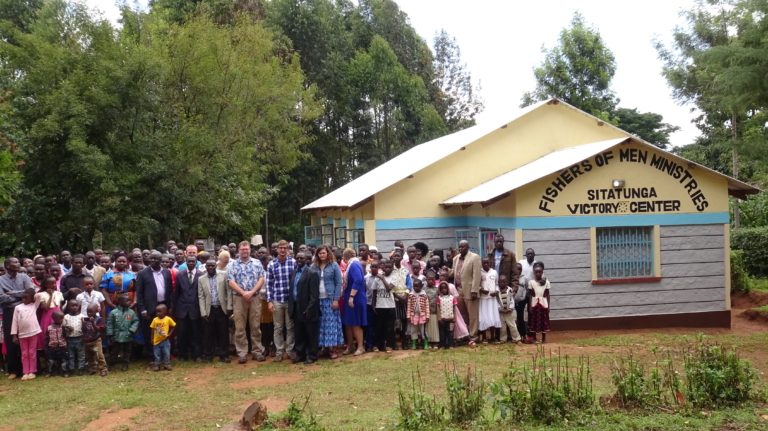 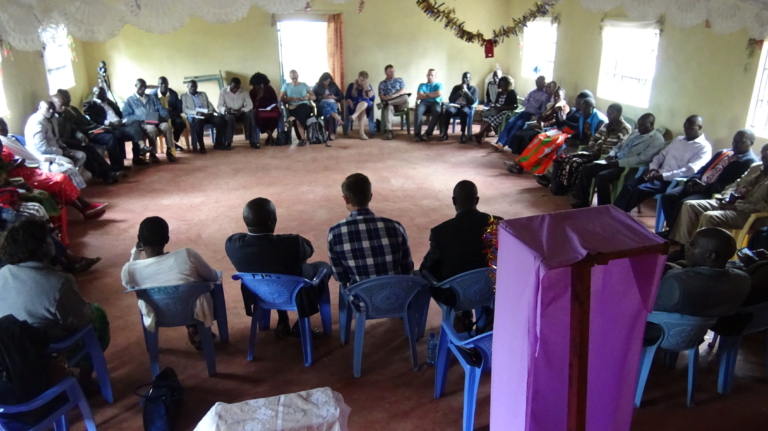 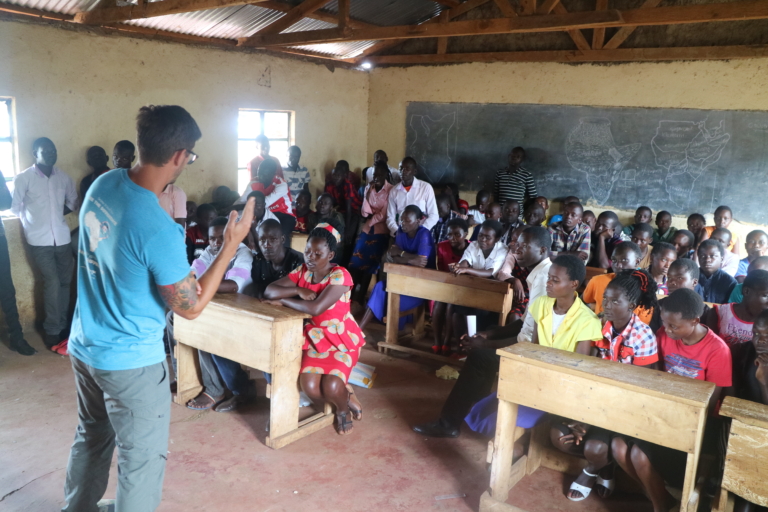